By Verner Wheelock with Marika Sboros

About 20 years ago Verner Wheelock began to have serious doubts about the validity of the official dietary guidelines.

These recommended that the whole population should reduce the consumption of fat, especially saturated fat and replaced by carbohydrates. Even though the target for saturated fat (set in 1984) had been achieved in less than 20 years, the incidence of Type 2 Diabetes and obesity continued to soar.

Instead of relying on official reports, food scientist Verner has gone back to the original research and applied a thorough evaluation of what is available. 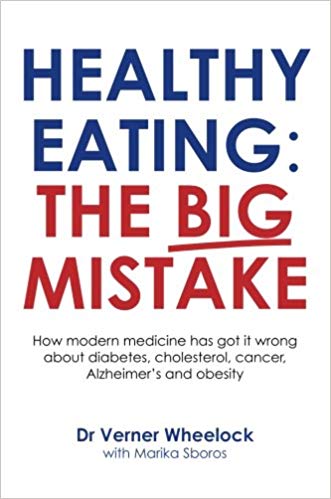 BUY THE BOOK ON AMAZON

After years of painstaking work, he completed the book with the help and support of Marika at the end of 2017. Marika is a journalist from South Africa with specialist knowledge of the healthcare professions and business.

The result proves conclusively that modern medicine has got it wrong about diabetes, cholesterol, heart disease, cancer, Alzheimer’s Disease and obesity.

Readers will discover that the book:

The book has received numerous plaudits. The reviews on Amazon are overwhelmingly FIVE STAR. Comments include:

“A real investigation into the fraud perpetuated by government, science and big food to push a political agenda at the expense of the nation’s health. Brilliant read.”

“An amazing little book. Worth every penny. Do yourself a big favour and read it! Research the myriad of references given after each and every chapter, and believe it. It’s time to take back your life from those who are happy to feed you lies and expensive drugs to line their pockets.”

“This book is a must-have for those interested in taking charge of their own health. It’s extremely well written and very readable. Be prepared for the totally justifiable anger you’re likely to feel though!”

“This book should change your diet, your health, your whole life! I bought eleven copies to give to family and friends.”